The HAMMessenger has been around for a little time now, but why is an iOS version missing?

Seriously, first announced at the Hamradio 2018, the HAMMessenger has since been updated to Version 2. And while I really like the idea of an Messager for Amateurradio, going unencrypted over the Hamnet. There was something that bugged me. As a member of the ÖVSV (Austrias Amateurradio club). I was at the Hamradio since 2013 (Well, I wasn't a member at that time but certainly the rest of my family).

Now the HamMessenger is only a available on Windows and Android, at least at that point in time back then. So I spoke with some of the guys in charge and got patched up with all the information that I need to work for an HamMessenger of MacOS.

So I decided that I'm gonna mention all the updates for people who are waiting for it (In fact I got an E-Mail that someone in Portugal is interested in it).

Developement began, finally. We are getting somewhere!

I restructered parts of the code in order to make the code less ugly. In the meantime I managed to send enough data so the system marks me as online! Good!

I managed to receive messages from the system. Which is great. I also managed to set to prepare my app for the new dark mode added in iOS 13!

With broadcast messages working and more importantly, me know how they work. I am hitting a turning point. I need to take a look into the design and prepare that for more functionallity.

And of course, a screenshot is included! 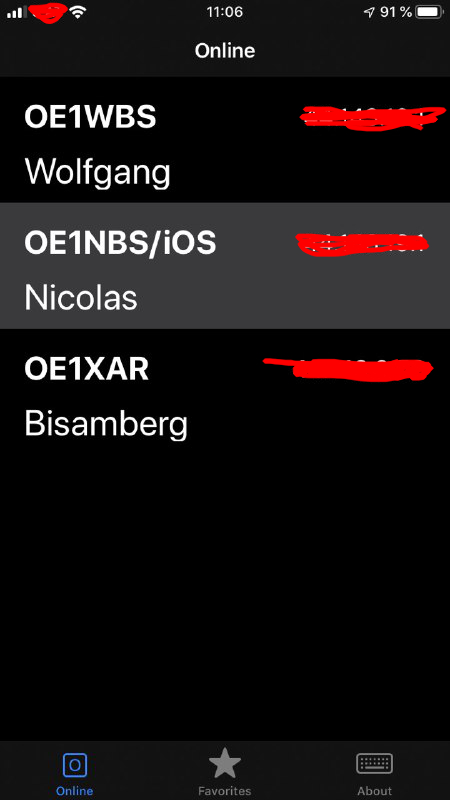 Update November as a whole

The online view got finished, calls were now added as their log into the system. But for some reasons it still remained to be really slow.

Update Febuary as a whole

Before I could react properly, November put a hold on my ability to code on it because I still had a school project that needed time and attention and tests to prepare for and and and. So nothing happened till Febuary but I returned and I hit it HARD!

Febuary brought me enough time to add CQ and BC messages. The fix for the keyboard not hiding was implemented, I added the ability to change the call that you used as well as a special startup screen and, and, and, It was a great month and really set the first stones for March.

March was crazy so far: Especially since I stopped working for a little again but also because I came back after having enough time again. I tweaked the UI here and there, changed some things that weren't cool to begin with. Added the ability to write privately. The chatlog is also saved for later, and done a lot of stuff actually.

And a note on the side, if you don't have an HamNet access, please go into the preferences of the app by pressing CMD + , and change the server to newradio.eu (Public server). Attention: Due to me using MacCatalyst, it won't support MacOS versions which are older than Catalina (10.15).

So, Sheesh. I feel like I've been hanging around like a lazy idiot. And to some degree, that who I am, a lazy idiot. But apart from that, school, holidays, trouble with friends and school again just suddenly made me forget about the ham messenger. Fuck People will tell me: I shouldn't use the f word if I want to look and sound professional, sure, I get that. But let me phrase it like that: Forgetting about the ham messenger for about nine month isn't any more professional either. I am SORRY.

However: Coming back I decided to rewrite a rather big part of the ham messenger to ensure it works in the next release.

Yeah, After Release Candidate comes gamma. Well, actually not but here it does. I'm not sorry. However: There are big chances that gave me enough reason to use gamma instead of continuing with rc versions. Because the whole TCP handling code has been rewritten...